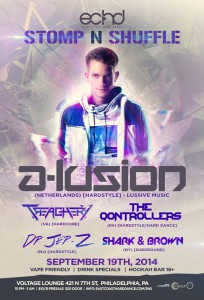 A-lusion, Onne Witjes, has more than 10 years of experience in the harddance scene. His typical “A-lusion” hardstyle sounds already convinced of hardstyle lovers throughout the world. A-lusion played on events such as Qlimax, Defqon 1, Q-base, InQontrol, Hardbass, Emporium, The Qontinent, Qlubtempo, and X-Qlusive. He has dj-ed more than in countries such as Austrailia, Sweden, Italy, Spain, France, Switzerland, Demark, and many more. Floorfiller productions such as “Perfect It”, “Drummer Beat”, “Between Worlds”, “Veritas”, “Visual Perception” and “Music In You” are played worldwide by all major jocks every week. A-lusion joined the leading record label Scantraxx Recordz back in 2003 and was the resident of Scantraxx World Artist Tour in 2007/2008. In the end of 2009 he launched a new project together with Scope DJ, called “Second Identity”. This new act is growing more popular day by day. The A-lusion sound is spreading fast!